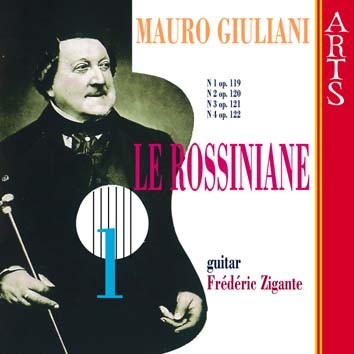 This is the first complete recording of the six Rossiniane for guitar composed during last century by the italian musician Mauro Giuliani. Frederic Zigante performs this music with plenty of technical resources and great musicality. Each Rossiniana contains an efficace medley of the most famous melodies taken from Rossini's operas. Volume 2 includes also three collections of Variations for guitar, never recorded before. These CD-s have been awarded in Italy as best production (guitar music) in 1996. Frederic Zigante appears on ARTS also in the complete edition of the Paganini's guitar music (47192 - 47195 4 CD-s).