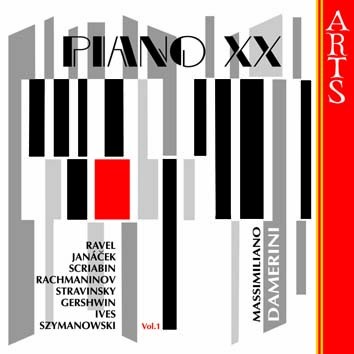 This is a wonderful journey throughout XXth Century Piano Music, performed by an accomplished artist that is well represented in ARTS' catalogue. The series XX offer a comprehensive summary of the music world of the last century and will be completed for the year 2000. After the award winning production of Flute XX with Roberto Fabbriciani (47167-2), the series will be followed during 1998 by Harp XX and Violin XX. In 1999 further additions with Cello XX, Piccolo XX, Bassoon XX, all productions utilizing the best european soloists. The two CDs now available include major works such us Ravel's La Valse, Scriabin's Sonata No.9, Berg's Sonata or Prokofiev's Suggestion diabolique, as well as little arities such us Roslavets' Prelude or Szymanowski's M'topes op.29. In the comporary music section volume 2 offers Berio's Sequenza No.4, Stockhausen's Klavierst?ck VII and two pieces dedicated to Damerini by the composers Brian Ferneyough and Sylvano Bussotti. Large essays and nice artwork for two generous CDs which offer even more than 80' music per CD!!