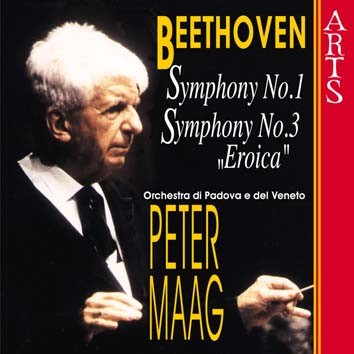 Beschreibung Bewertungen 0
Beschreibung
This is the fourth issue of the complete symphonies of Beethoven released by the last living... mehr
Menü schließen
Produktinformationen "Beethoven: Symphonies Nos. 1 & 3"

This is the fourth issue of the complete symphonies of Beethoven released by the last living pupil of Wilhelm Furtw„ngler, Peter Maag, conducting a chamber orchestra. An exciting mixture of the greatest german tradition and of the philological mood. We remind you that the critic acclaimed the previous volumes and that even the german critic awarded these symphonies as one of the best releases of 1995. The Ninth Symphony (ARTS 47 248) sold about 10.000 copies in the first three months and has been enthusiastically reviewed in all countries as 'maybe the best Ninth of the last 15 years.' Peter Maag offers a powerful reading of the 'eroica' and gets strong effects, even with his chamber orchestra. The last volume with symphonies nos. 5 & 6 will appear soon. All of Beethoven's symphonies will be collected in an elegant 5-CD box set.

- First recording of Beethoven's symphonies by Peter Maag, the last pupil and heir of Wilhelm Furtwängler
- Performance of the highest artistic quality
- A new mixture of old german tradition and philology, utilizing a - chamber orchestra
- Highest acclaim for the previous volumes