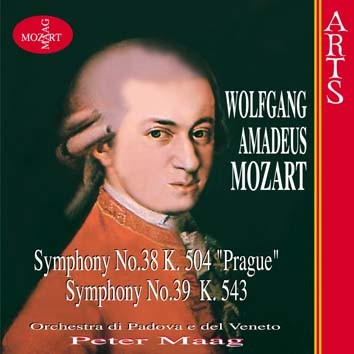 Beschreibung Bewertungen 0
Beschreibung
After the extraordinary success of the complete symphonies of Beethoven, Peter Maag and the... mehr
Menü schließen
Produktinformationen "Mozart: Symphonies No. 38, K. 504 " Prague " & No. 39, K. 543"

After the extraordinary success of the complete symphonies of Beethoven, Peter Maag and the Orchestra di Padova e del Veneto are offering the late symphonies of Wolfgang Amadeus Mozart in three single CDs. Since Peter Maag is acclaimed as one of the best conductors in the Mozart repertoire, we are especially proud to offer these recordings. These are performances of an extraordinary intensity, with plenty of novelties even in a repertoire as well known as Mozart's late symphonies. The performances offer an interesting mixture of an old Kapellmeister feeling and philology. Not to be missed! The first two CDs, including Symphonies Nos. 38 &, 39 (ARTS 47364-2) and Nos. 40 &, 41 (ARTS 47363-2) are receiving success both of critic and public even bigger than the recordings of Beethoven's Symphonies. Also available with Peter Maag: Mozart Symphonies Nos. 31, 33, 34. , Mozart Great Mass K 429, Mendelssohns symphonies and Gluck's Orfeo ed Euridice.

- Peter Maag conducting, following success of Beethoven's symphonies
- Performances of the highest quality
- An attractive mixture of old and new, Kapellmeister-style and philology
- For Peter Maag's fans or for those who may become Peter Maag fans