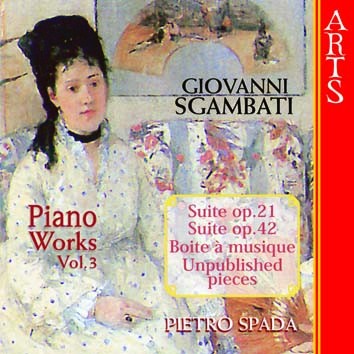 Following a deep and long research in musical archives, Pietro Spada was able to achieve the first ever complete recording of Sgambati's piano works. Giovanni Sgambati (1841-1914) was considered as the most important Italian pianist of the 19th Century. He was also recognized as the only true alternative to Franz Liszt who was formerly his teacher and later his best friend. He toured Europe with Liszt and altogether with him Sgambati founded the "Scuola Romana", one of the most important music schools of those years. As virtuoso piano player and composer, Sgambati performed throughout all Europe, being close friend to Wagner and Rubinstein. The most well known pianists also played his compositions until the first part of the last century. Surprisingly neglected by the record companies, Sgambati is one of the few composers that really deserve a better renown. Arts is proud to offer this complete edition in four CDs, including many unpublished works, besides famous "encores" such as the "Canzone Lituana". Pietro Spada confirms to be the most authoritative performer of Italian piano music. He also edited the complete works of Sgambati, which will be finally published altogether with these CDs.